The Confederated Tribes of the Colville Reservation: Changing the Tide

In windswept north-central Washington, the Confederated Tribes of the Colville Reservation have created a new public-private partnership to address substance abuse and chart a path toward a brighter future. 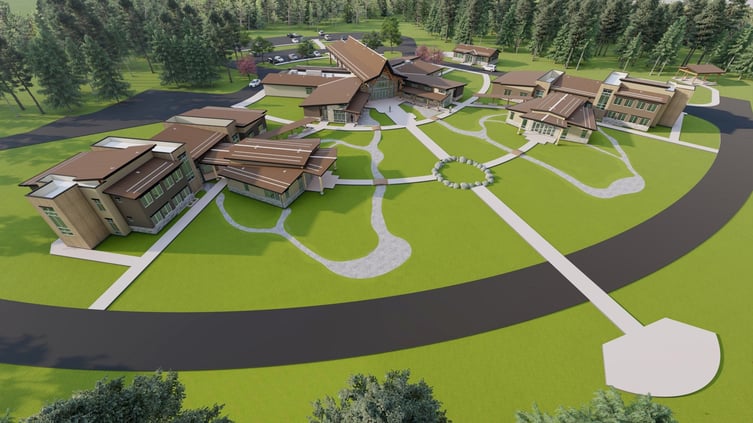 If there’s one thing to know about the native people of the region now known as the Columbia Plateau, including eastern Washington, southern British Columbia, northeast Oregon and parts of Idaho, it is this: Life is not easy for them, and rarely has been.

Before the influx of mid-1800’s white explorers, the Lakes, Colville, Okanogan, Moses-Columbia, Wenatchi, Entiat, Chelan, Methow, Nespelem, Sanpoil, Chief Joseph Band of Nez Perce, and Palus Indians traversed this region in seasonal patterns in an effort to survive and thrive. These tribes, now known collectively as the Confederated Tribes of the Colville Reservation, moved across some of the most unforgiving terrain in North America, a 39-million-acre expanse.

For more than 10,000 years they hunted, fished, traded goods, and gathered roots and berries while contending with inter-tribal conflicts, hunger, illness, injury, impassable mountain ranges, the blazing heat of summer, the punishing rains of fall, the snows of winter, chilling high-plains winds, and attempts to navigate the West’s most powerful river: the Columbia and its tributaries. Despite these hardships, these resilient peoples maintained their cultures and thrived.

However, the arrival of the first white settlers in the tribes’ shared ancestral territories, along with a later dispute between Great Britain and the United States in 1846 that divided their lands at the 49th Parallel, began a shift in the tribes’ fates from which they have never fully recovered. By 1872, further white incursion into tribal lands led President Grant to declare the need for a single reservation of millions of acres for all 12 tribes, thus marking an end to their ancient seasonal subsistence rounds and sedentary winter village existence. Just three months later, that area was reduced to about 2.8 million acres.

Economic and cultural assaults continued, including the 1930’s construction of the Grand Coulee Dam, radiation poisoning starting in the 1940’s from the Hanford nuclear site, and 1950’s policy efforts to terminate America’s tribes and assimilate them into mainstream American society. The nonstop assaults have fueled historical trauma, a loss of native languages, violence (including high levels of gang violence, domestic violence, and sexual assault), poverty, high levels of unemployment, discrimination, and cancer, diabetes, heart disease, and depression levels high above the national average. Today, nearly 150 years after the establishment of the reservation, the Colville Tribes’ collective land is down to just 1.4 million acres in rural north-central Washington, just a few hours from Spokane.


The Modern Fight for Health and Survival

Today, the Colville Tribes face yet another major crisis, a more modern one rooted in the trauma and disenfranchisement of the past: The scourge of alcohol and substance addiction.

According to the National Institutes of Health, Native Americans have the highest rates of alcohol, marijuana, cocaine, inhalant, and hallucinogen use compared to all other racial or ethnic groups. They have the highest methamphetamine abuse rates — more than three times higher than any other group. Nearly one in five Native Americans aged 18-25 years has a substance use disorder. At the same time, Native Americans also have limited access to substance abuse services due to transportation issues, lack of health insurance, poverty, and a shortage of appropriate treatment options in their communities.

These circumstances have combined to create a substance abuse epidemic for the Tribes. Viewing substance abuse as an epidemic affecting an entire population can shift the focus from blaming individuals for their choices to understanding the conditions — poverty, unemployment, lack of opportunity, and scarce social supports — that make drug use more likely.

The Confederated Tribes of the Colville Reservation have attempted to address the substance abuse epidemic for years through their own behavioral health program. Yet, according to program staff, they are only able to provide out-patient services that do not begin to meet the needs of the various communities scattered across the reservation. And according to the Colville Business Council, the Tribes’ governing body charged with advocating for roughly 9,500 enrolled tribal members and their surrounding communities, in recent years there’s been a 30 percent increase in court-ordered drug- and alcohol-related treatment; in 2016 alone, more than one in 10 arrests by tribal police was directly related to drugs and/or alcohol. Offenses include possession, distribution, DUI, domestic violence, and child abuse or neglect.

Facing overwhelming addiction issues and numbers trending in the wrong direction, the Business Council began to envision a fresh approach: a new on-reservation treatment center. According to the Indian Health Service (part of the U.S. Department of Health and Human Services), many of the disparities in treatment that occur within Native American populations can be resolved through increased access to culturally-sensitive treatment programs, and local adaptations of treatment protocols can address the significant diversity among Native Americans, including differences in language, culture, and customs.

According to Rodney Cawston, the Colville Tribes’ elected Chairman, “The effects and consequences of alcohol and drug abuse on families is devastating. Side effects can include low self-esteem, low student achievement, child custody, financial problems, domestic violence, poor work performance or termination. Serious issues include criminal offenses incarceration, overdose, and death. These side effects are too prevalent and socially tolerated. Our families need relief and healing through treatment programs designed to incorporate our culture, tradition and spirituality, and stafffed by our own people who care.” 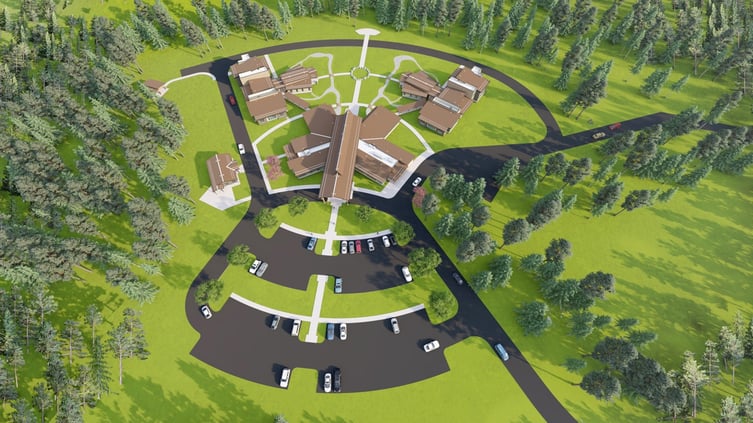 June 2019, the Business Council turned to Travois, a Certified B Corporation focused exclusively on promoting housing and economic development for American Indian, Alaska Native and Native Hawaiian communities, to help them identify investors for the treatment center.

Travios and the Business Council immediately embraced the idea of New Markets Tax Credits (NMTC), a complex financial tool used for economic development in communities facing a lack of opportunity or inadequate access to capital. The federal NMTC program, created in 2000, is designed to attract investment in distressed communities in exchange for future tax credits for private investors.

The Business Council was already familiar with NMTCs, as they were utilized in the construction of their Lucy F. Covington Government Center in 2014, a building named after a woman from the reservation who fought against the federal government and the Termination Bill of 1953 and later became a national leader in civil rights and the protection of tribal lands. When contemplating the contruction of an on-reservation treatment facility, the Business Council again realized that utilizing NMTCs was not only good for the Colville Tribes but also for the federal NMTC program, which, at times, has been criticized in some circles as a tax-giveaway.

“The more we use this process and the more we do it in the way Congress intended,” said Francis Somday, the Tribes’ Executive Director, “the more firm this legislation becomes.”

Travios soon identified Craft3, a certified nonprofit Community Development Financial Institution and Community Development Entity (CDE) under the NMTC Program as a potential investor. Craft3, with a focus on mission-related investment lending in underserved communities and deep experience in Indian Country, agreed to move forward with a $10 million NMTC allocation. Ecotrust, another CDE, joined them with a $6.5 million allocation, and the State of Washington approved $4.5 million for the project in a special session. U.S. Bank was the vehicle for the NMTC-related tax credits.

“In 25 years of lending, this is one of Craft3’s largest-ever single investments in Indian Country,” said Adam Zimmerman, Craft3 CEO. “For decades, the Colville Tribe has focused on combatting drug and alcohol abuse on the reservation through a multi-pronged strategy involving public awareness, prevention, identification, and intervention. Our investment in this accessible drug and alcohol treatment facility on the reservation will help bring to fruition the final piece of this strategy.”

“In 25 years of lending, this is one of Craft3’s largest-ever single investments in Indian Country,” said Adam Zimmerman, Craft3 CEO. “Our investment in this accessible drug and alcohol treatment facility on the reservation will help bring to fruition the final piece of this strategy.” 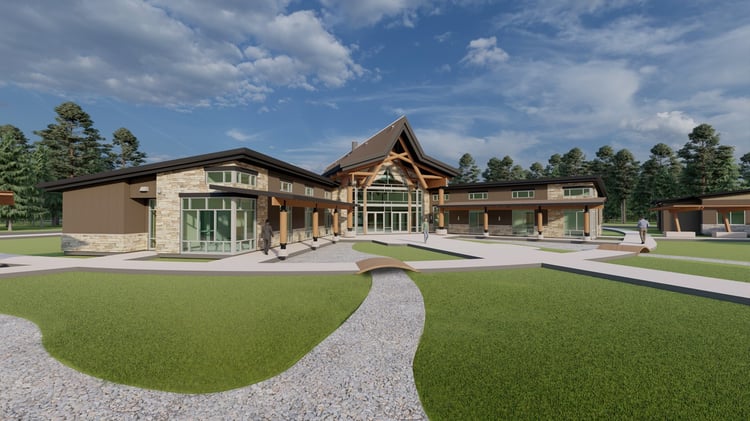 In 2020, the Confederated Tribes of the Colville Reservation broke ground on the new $20 million, 32-bed San Poil Treatment Center on 13 scenic acres near Keller, Washington. From the perspective of the Business Council, there is no time to waste. They are moving forward despite the challenges of COVID-19 and construction during the punishing Eastern Washington winter. Along with the treatment center, there will be equine therapy, meditation paths/trails, sweat lodges, therapeutic courtyard, and scenic views of the river and mountains.

The 35,000-square-foot campus will be a healing retreat that responds to the needs, culture, and traditions of the Colville tribal members in a design that reflects the evolving broader vision and culture for present and future generations. Services within the facility will be administered by the Colville Tribe’s Health and Human Services Department, and the care model is built around an average 90-120 day stay with 24/7 care. The center will also create 41 full-time permanent jobs, and 82 temporary construction jobs, both 50 percent or more from tribal members and/or low-income communities.

“Substance abuse is a treatable disease, but access to inpatient programs has been a barrier for many in our community and the surrounding areas,” said Jack Ferguson, Councilmember for the Colville Business Council and Keller District representative. “This new facility in Keller will address that need and increase access to care.”

“Substance abuse is a treatable disease, but access to inpatient programs has been a barrier for many in our community and the surrounding areas,” said Jack Ferguson, Councilmember for the Colville Business Council and Keller District representative. “This new facility in Keller will address that need and increase access to care.”

Over the years, the innovative Colville Business Council has built a diverse, multi-million dollar portfolio financed primarily from the sale of the Tribes’ timber products, a gaming division with three casinos, mining, livestock, fee-based recreation areas, and additional revenue from other sources including federal, state, and private contributions. The Colville Tribe is now a major regional force, with additional work that includes investments in off-reservation properties for future developments.

While all of these prospects come with risk and potentially huge reward, the Colville Tribe is boldly moving forward. Their new treatment center is a key piece of this larger strategy, an innovative step, years in the planning, to address substance abuse and work towards minimizing its incidence and its social costs.. This work, they say, falls within their strategy to strengthen individuals within communities by supporting their health, work, and pride.

The ultimate goal: Build a brighter future for today’s generation, and for those to come.