Since publishing this article, Chief Don Ivy passed on July 19, 2021 after a courageous seven-month battle with cancer. 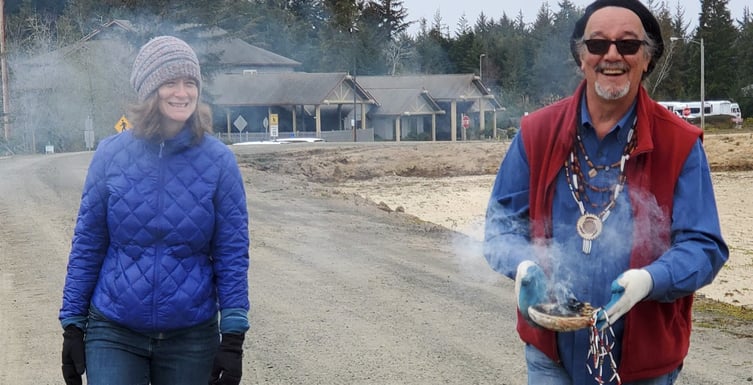 As the Coquille Indian people travel southwest Oregon’s rugged coastline and interior, they trace footsteps of at least 11,000 years of history and generations too numerous to count. Their ancestors were there at the end of the last Ice Age. They were there when Rome rose and fell. They were there when Stonehenge and the pyramids were built, and when the last-known mammoths walked the earth.

And today, when Coquille Indian Tribe Chief Don Ivy talks about living there, he speaks of walking in ancestral footsteps that are deep in time and deep in experience. This long history forever binds him, and all Coquille people, to the lands and waters of the region.

So it is here, just up the hill from Cape Arago Highway, and atop a former cranberry bog, that heirs of this ancient culture are creating a new approach to health care.

When it is finished next year, the 22,000-square-foot Ko-Kwel Wellness Center (the name highlights the historical pronunciation of the tribe’s own name) will nearly triple the Coquille Tribe’s existing health-care space. It will offer primary health care, dentistry, a pharmacy, and behavioral health, potentially adding chiropractic, massage, acupuncture and other services in the future – all under one roof.

Coquille Indian Tribe families, tribal employees, and other patients will come together for the first time in a diversified, one-stop shop. The tribe is even applying its potlatch tradition of community sharing by welcoming the non-tribal public to the wellness center — the first tribal health facility in Oregon to take such as step.

“Our goal is to be able to take care of the whole person, not just the part that needs a prescription,” said Coquille Tribal Chairman Brenda Meade. “We’re creating a holistic wellness experience, in keeping with our people’s traditional values.”

Chief Ivy goes one step further: “This is a home for healing.”

Chief Ivy goes one step further: “This is a home for healing.”

Healing and innovation are two things with which the Coquille Indian Tribe are intimately familiar.

The Coquille people historically lived in the Coquille River watershed, on the lower reaches of the Coos Bay estuary and near the modern-day city of Coos Bay, in what is now the Oregon Coast’s most populated area.

The Coquilles, along with most of Oregon’s coastal tribes, signed the 1855 Coast Treaties, which forced them to move to the Coast Indian Reservation, now known as the Siletz Reservation. Between the 1860s and 1880s, as federal policies reduced the reservation’s size, the Coquilles were displaced again – essentially sent back to homes that no longer existed.

Congress “terminated” the Coquilles’ federal status in 1954, thereby extinguishing all remaining vestiges of those long-ago treaties. In 1989, however, after three decades of official non-existence, tribal leaders’ bold and persistent efforts persuaded Congress to restore federal recognition.

Restoration righted a historical wrong and made Coquille people eligible once again for federal programs and services. But it didn’t provide land or resources with which to build a tribal economy. Achieving economic success and governmental self-sufficiency was left to the Coquille people.

With the assistance of private investors, the tribe was able to purchase 1,000 acres of timber lands and a defunct sawmill. The timber lands eventually would become “Kilkich” – the tribe’s modern “reservation village” and the location of the Ko-Kwel Wellness Center. The sawmill would become the tribe’s Mill Casino-Hotel & RV Park.

As tribal enterprise flourished, so did family-wage jobs and health benefits to tribal families and tribal employees. Three decades after restoration, the Coquille Indian Tribe has become Coos County’s second-largest employer and an important contributor to the southern Oregon Coast’s social, political and cultural vitality.

Financial success enabled the Tribe to think broadly and flexibly about the next steps toward fiscal and cultural self-determination. Along the way, tribal leadership became familiar with New Markets Tax Credits (NMTC), a complex financial tool used for economic development in communities lacking opportunity or capital. The federal NMTC program, created in 2000, is designed to attract private investment in distressed, low-income communities in exchange for future tax credits for private investors.

The tribe eventually acquired an NMTC allocation to help acquire the 3,200-acre Sek-wet-se Forest, with the goal of sustainably managing forestland and creating jobs. Considered part of their ancestral homeland, this forestland contributes to the tribe’s long-term vision for economic self-sufficiency and cultural revitalization. Altogether, the tribe owns more than 10,000 acres of sustainably managed forestland.

“Craft3’s entire reason for being is to deliver hard-to-find capital to the most meaningful projects in Pacific Northwest communities,” said Craft3 President and CEO Adam Zimmerman. “When we are honored with long-term partnerships like this one with the Coquille Indian Tribe, and persistent enough to attract scarce NMTC resources to our region, so much good becomes possible.”

“We couldn’t just write a check,” said Chief Ivy. “Without New Markets Tax Credits and without Craft3, this project doesn’t exist. The tax credits gave us the foundation of funding; it was the platform for success.”

“We couldn’t just write a check,” said Chief Ivy. “Without New Markets Tax Credits and without Craft3, this project doesn’t exist. The tax credits gave us the foundation of funding; it was the platform for success.”

With Craft3’s anchor NMTC investment as the foundation of project, Wells Fargo stepped forward as the major investor and fronted construction money to the tribe in return for future NMTC-related tax breaks. Craft3 and Coastal Enterprises Inc. stepped forward with additional loans for the innovative $12 million financing package, which also included support from the U.S. Economic Development Administration, Meyer Memorial Trust, the Indian Health Service, the Northwest Area Foundation, and others.

The Kilkich reservation village, now a beautiful community of homes and tribal offices where windswept juniper fills the air and the Coos River meets the Pacific Ocean, is the site of the future Ko-Kwel Wellness Center. According to Tribal Chairman Meade, the building is designed to have tribal members feel welcomed in a setting that celebrates their history. 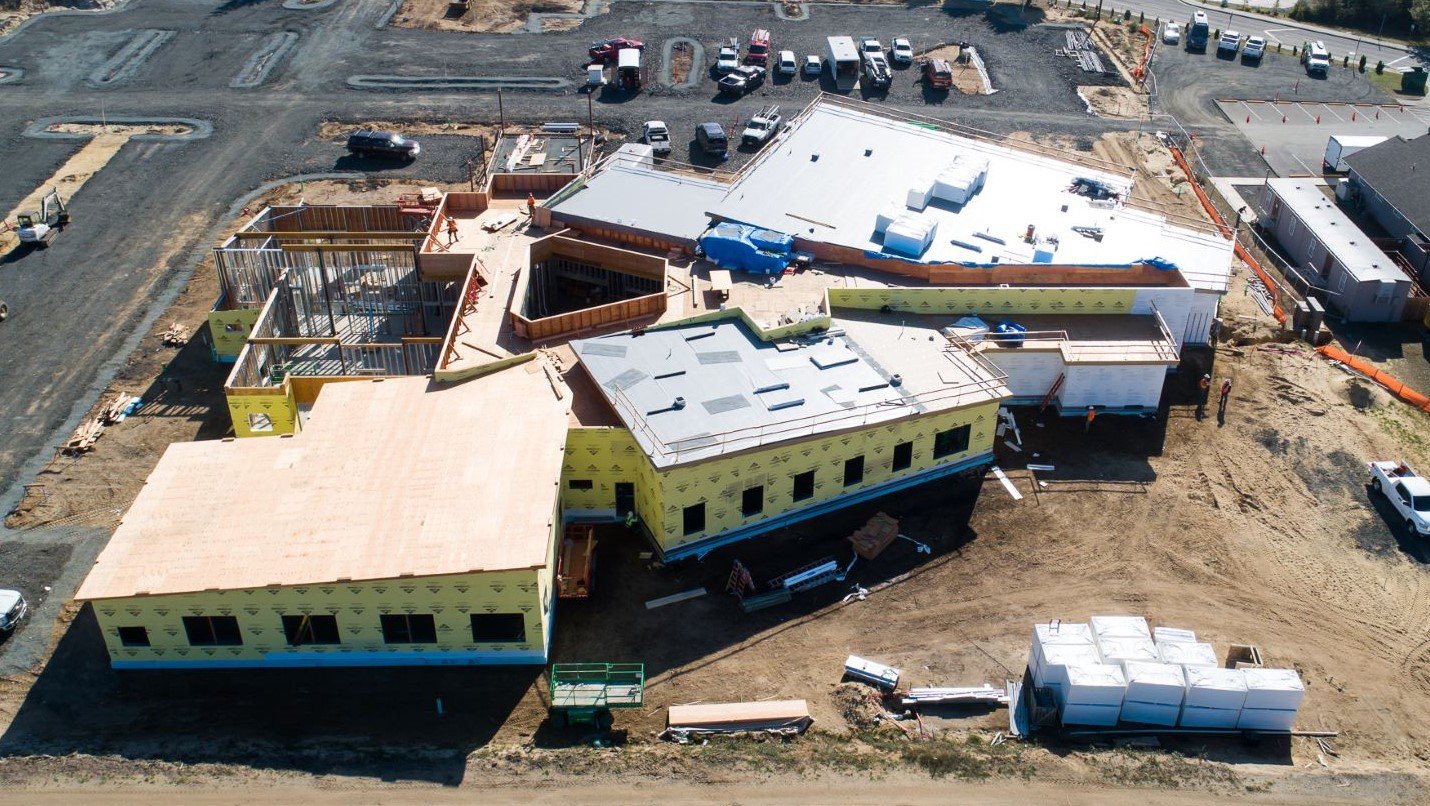 The wellness center will be an up-to-date structure, yet infused with more than 10,000 years of tribal history. Reinforced concrete and quake-resistant steel piling will combine with indigenous cedar planks and Coquille River rock. The color scheme will evoke the South Coast environment. Indigenous plants will fill an interior courtyard, flanked by corridors tracing the shape of a fishing spear. Showcases will display the tribe’s basketry, beadwork, and even a cedar canoe. Construction remains on schedule despite the economic hardships of a global pandemic.

The center won’t compete with existing clinics, but rather offer additional options in a community where health care providers can be hard to find, and where people are frequently referred to other towns for additional services. The center’s goal: Keep folks local, keep them healthy, and create jobs and stronger families along the way. Plans call for the center to serve 6,500 low-income families with significantly reduced or no out-of-pocket expenses, create 26 new jobs, retain 31 living-wage jobs, and help the Coquille Indian Tribe achieve its goals to reduce tribal member diabetes by 10 percent while doubling tribal members’ annual dental exams.

According to Chief Ivy, the Coquille Indian Tribe’s painful history of termination, assimilation, and restoration was a major factor driving the decision to pursue the Ko-Kwel project. With 1,100 tribal members, a tribal population that’s doubling every 25 years, a service area across five counties in Oregon, and members in 18 states, Ivy says that building a home base to help heal his nation needed to be at the center of the tribe’s modern work.

It would be difficult to think about all of our work without thinking about the interdependencies and impact on others,” he said. The tribe and the project, he says, are successful because they’re focusing on the values that enabled them to be successful as a tribe in the first place: consistency, culture, focus, resilience.

“We’re taking care of each other together,” he says. “And our success is the result of the success around us.”

“We’re taking care of each other together,” he says. “And our success is the result of the success around us.”