Rockwood Rising: A Vision of Empowerment

In a historically disenfranchised neighborhood just east of Portland, Oregon, the Rockwood Rising revitalization seeks development without displacement and a future of pride for neighborhood residents. 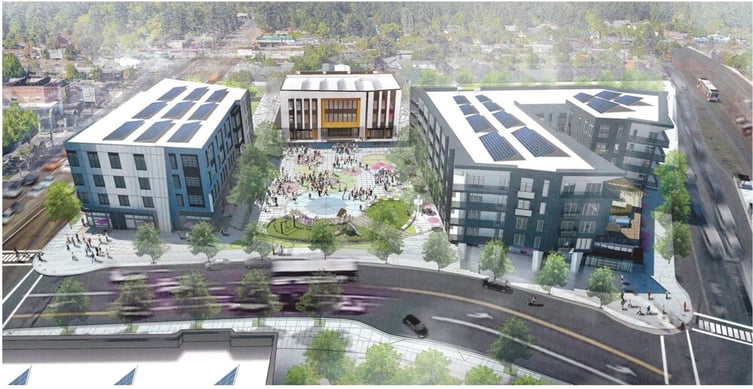 When people in Portland, Oregon’s business community speak of developer Roy Kim, there seems to be a common refrain: he is extremely likable. They say the trim, quiet, bespectacled 61-year-old is calm, kind, an exquisitely good listener, and that he takes his time to carefully answer their questions.

They cite his work ethic and smarts (he earned himself a master’s degree in civil engineering from Stanford in his youth before starting a career that has spanned construction management, development, and property management), his dedication to family, and his generosity. These are but a few descriptions in a long list of praises for Kim, and frankly, it’s hard to find anyone who has anything negative to say about him.

If you ask Kim about his reputation, he answers with a mix of surprise and humbleness. “Wow,” he says. “I didn’t know people thought of me that way.”

And if you ask him about the source of that kindness, he says that while his mother was kind to everyone she met, his father was also kind, but in a different way.

“He was always quietly taking care of others who were not doing well,” he says. “That made a big impression on me.”

His childhood lessons along with his hard-earned experience, including a life spent living both in the U.S. and abroad, have combined to leave a permanent, positive mark on the greater Portland region. Kim’s remarkable 30-year run developing projects, including several in historically distressed neighborhoods, recently led Oregon Business magazine to deem him “The Shaper.” He says he is often drawn to challenging projects in underserved neighborhoods that no one else wants to touch because his goals extend far beyond dollars and cents. These days he wants to help people and create places they are proud to call home.

Kim is now president of his own company, Central Bethany (the parent company of RKm Development), and of late he’s turned his decades of talent, energy, and vision toward creating yet another place that he hopes will transform lives: Downtown Rockwood.

The forthcoming Downtown Rockwood development, which broke ground in summer 2019 in the city of Gresham just east of Portland, is located at the heart of one of the state’s most diverse neighborhoods. Within one mile of the site, 29 percent of residents identify as foreign-born, as compared to 13 percent within the greater Portland metropolitan area, and 43 percent identify as Latino, Asian, or African American. Residents have a lower median household income ($35,000 as compared to $60,000) than others in the Portland metropolitan area, resulting in higher rates of food insecurity, crime, poverty, and houselessness.

Kim believes the four-building, nearly 200,000-square-foot development will help turn around the fortunes of a neighborhood long-ignored by developers. When complete, Downtown Rockwood will bring a much-needed international grocery marketplace to address the neighborhood’s lack of food options. The Living Hub will offer residential units over commercial spaces, and the Market Hall will include five micro-restaurants -- kitchen and counter -- that are designed as pandemic-ready, carry-out storefronts. The development’s 50,000-square-foot business center is almost fully rented, with only 900 square feet left available -- even during the pandemic. Oregon Tradeswomen, a job-training nonprofit offering women pathways to success through trades training, was one of the first businesses to open at Downtown Rockwood, starting operations at their new standalone headquarters and training center. Between the four buildings will be a new public plaza featuring multiple age-specific play areas for kids, public art spaces, and an area for festivals and events. When complete, it’s anticipated that the project will create over 100 permanent jobs, of which 90 percent are expected to be filled by low-income individuals. It is also expected that the majority of jobs will be held by people of color, as exemplified by the local neighborhood. 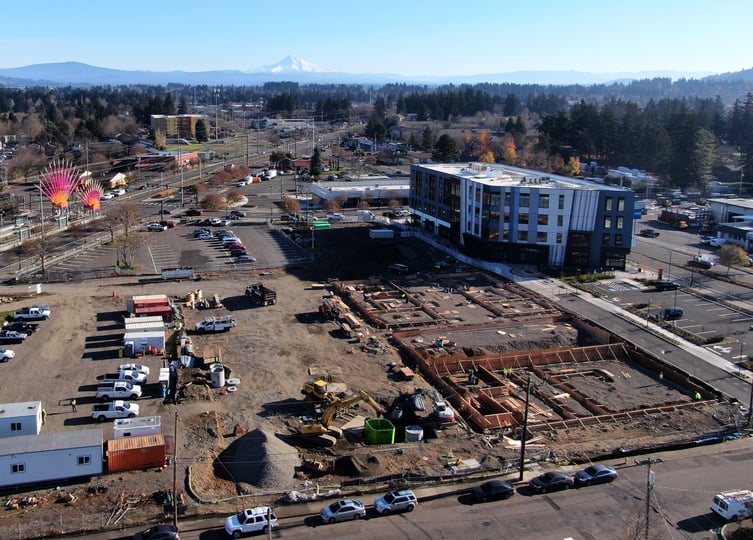 The long-envisioned project -- part of the Rockwood-West Gresham Urban Renewal Area -- stalled for many years due largely to the scant number of developers willing to invest in such a distressed census tract. However, Kim says he has grown to enjoy taking on challenging projects that others don’t want to take on; his goal these days, he says, is community impact. He truly believes in the power of public spaces to positively impact neighborhoods and communities, and his vision for Downtown Rockwood is a dense, affordable, livable, mixed-use development with an eye toward accessibility and diversity.

To bring the long-stalled Rockwood Rising development to fruition, Kim knew he’d need financiers who, like him, were mission-minded and willing to consider more than just the bottom line.

Kim’s search led him to Craft3, a certified nonprofit Community Development Financial Institution and Community Development Entity (CDE) with a focus on underserved communities. Kim says there’s something to be said for the fact that Craft3 has employees from the Rockwood community who inherently understand the neighborhood’s potential.

Perhaps most importantly, Craft3 was deeply experienced with New Markets Tax Credits (NMTC), a complex financial tool used for economic development in communities facing a lack of opportunity or inadequate access to capital. The federal NMTC program, created in 2000, is designed to attract investment in distressed, low-income communities in exchange for future tax credits for private investors.

“New markets tax credits were essential to getting this project off the ground,” Kim says. “Without Craft3, this project just doesn’t happen. The rents in the area are too low for it to make sense through traditional development financing.”

Craft3 is providing a $7 million NMTC allocation to the Downtown Rockwood project while a second CDE, Capital One, is providing a $2 million allocation while also serving as the investor purchasing the tax credits. Craft3 is also providing a cash loan of $3.5 million directly to the project, in addition to significant public funding from the City of Gresham. The first building on the property opened in autumn 2020.

“This project is in our backyard,” said Adam Zimmerman, Craft3 President and CEO. “We selected this project because we know the people and the impact it will make in this community. There will be huge, amplified outcomes for Rockwood and Gresham as a whole.”

A Place to Call Home

Kim says that once Downtown Rockwood is complete, kids will go to events at the plaza and get snacks at the Market Hall. This will be part of the lasting vision of their childhood hometown. Today, if you ask someone who grew up in the neighborhood 20 years ago, Kim says they will talk about the dirt fields in Rockwood and other things associated with growing up in a poor neighborhood. He hopes that Downtown Rockwood will change how today’s children view their neighborhood. He wants people to be proud of where they grew up, and to come back as adults.

In community meetings leading up to the project, Kim recalls someone came up to him and said, “I don’t believe you are going to do this because we haven’t had anyone invest here for three decades except for low-income housing. It’s gone on so long that we don’t believe it.”

Kim promised that it would happen, and true to his word, it is.

Kim says people need to know that there are those who truly want to see the Rockwood area improve, and they have the ability to make it happen. He wants Downtown Rockwood to inspire other developers to invest in low-income areas, where there is often so little inspiration to do so. Kim says there is so much interest in this project that they had to adjust the design of the Market Hall to add 7,000-square-feet of office space in response to community demand. This, he says, is possible in all distressed neighborhoods.
Kim believes Downtown Rockwood will build on community assets to transform one of Oregon’s most under-resourced neighborhoods into a community-sustained economic engine that breaks the generational cycle of poverty and builds long-term prosperity. For him, the project can be boiled down to a single word: Empowerment. His mission is to bring revitalization without displacement, and to empower residents to build prosperity for themselves by focusing on bringing job creation, job training, and small business support to Downtown Rockwood. This is exemplified by the types of business tenants currently operating in the business center that opened in fall 2020, including WorkSource Oregon, Mount Hood Community College Small Business Development Center, Little Wings Academy, and Wallace Medical Concern.

Kim, always The Shaper, says he’s been in commercial real estate long enough to know how truly cyclical real estate can be. He understands the risks and the stakes with Downtown Rockwood and relishes the challenge; for him, this is the sort of NMTC-based investment America needs, especially now. He’s seen projects in similar neighborhoods not just foster pride, but completely change neighborhood residents’ views – often long held – about where they live. 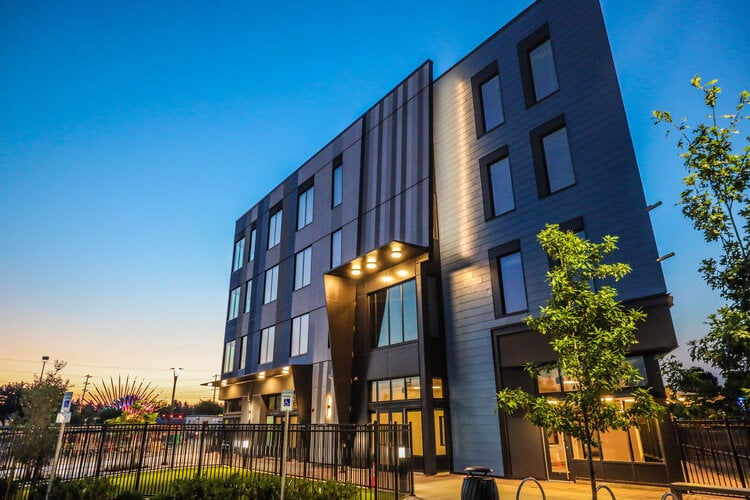 Kim believes this will happen in Rockwood, too. The images and experiences of your childhood are seared in your mind forever, he says, and they affect your whole life. Rockwood has seen little new development (other than income-restricted housing) for a long time, and now hopefully the neighborhood’s kids will grow up with a different view of their home.

These emotional impacts excite Kim and are the driving force behind his personal mission: to create vibrant communities where everyone can live, work, shop, eat, and play.